Unlike many filmmakers, I had no special childhood interest in films.  I do not recall being enthralled by them, or in any way drawn to their magic.  I think I was somewhat ordinary in that sense.  I do vaguely recall going to Saturday matinee screenings for kids – usually cowboy things, maybe the occasional Disney animation, Cinderella or Snow White.  And at a slightly late age, since my family was stationed overseas until 1954 or 55, I saw television, of which I recall a few things.  A Walt Disney hour, which perhaps initiated my loathing for this man and his perverse work.  And an hour in which Alfred Hitchcock introduced a program which supposedly reflected his somewhat macabre sensibilities.  Though my memory may be defective here, I think I also used to watch Ernie Kovacs in a morning breakfast show, and I quite liked his rather surreal and, especially for the times, bizarre sense of humor.  I suppose these days much of it would be cited as racist, or otherwise unPC.

There are two little shards of memory which suggest a future in cinema.  One was that when living in Germany, in a suburb of Augsburg, somewhere around 1953-4, we spent a year not on a military base, but among civilians.  I have no memory how, but as it happens I befriended a young German boy, and his father ran the local cinema.  In consequence I got into Saturday matinees for free, and also got to go back into the projection booth.  I recall no more, though I suppose a young boy would have been fascinated with the mechanical stuff of projectors and big 35mm reels of film.  How could one not be?

The other matter is rather different, and I cannot at all recall the likely year, except that I must have been quite young – 8 or 9 or so.  In school our class was given the assignment to work in little groups of 5 or 6 students, and to cook up and present a little play.  I recall that I must have seized the reins, thought up the story, and cast myself in the lead role.  The story involved a carnival or circus freak show, and the plot, to the degree there was one, or one that I can remember, is that the lead “freak” was kidnapped.  Presciently I cast myself as this freak as I had the “talent” back then (and still do to some degree) to roll my stomach muscles to make a profound ripple with my gut.  And so in our play, I removed my shirt and began to roll my stomach, I suppose to the amusement of the other children.  But not to the teacher, who promptly stopped our play, and there, in my first time out, I got the censor’s snip.  At the time I had no idea why, though in hindsight I suppose the teacher, a woman, perceived my “act” as highly sexualized, and hence, the curtains were dropped.  Again, a hint of my future.

This happened once again, in high school, in Annandale, Virginia, probably around 1958, where, while performing at a dance as a solo rock & roll act, I was singing a ditty I’d written that went something along the line of, “Hey Joe, we’re gonna go to the burly-que show…” and some lines about liking your girls short & fat, tall and thin, and such things.  Again, I was given the showbiz hook. 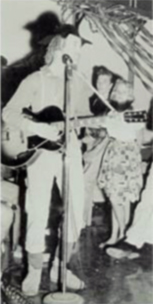 And a last other item, which surely would have seen me punished far more severely than simply being censored, was a little animated drawing I made – for my eyes only.  Back then, in the mid-fifties, 3D was one of Hollywood’s lures, along with Cinemascope and other such gimmicks.  There was The Creature from the Black Lagoon, and a few others the names of which I do not recall.  Then the 3-D was in black and white, or more exactly in red and blue, and one watched with a pair of said glasses.  I turned these to another use.  While I had never seen such a thing, and porn in those days consisted of stag shows to which I was not privy, I suppose basically the matter is rather hard-wired into our biological systems.  And so I made a little line drawing of a couple, well, fucking.  Not in 3D, but in motion:  my figures were drawn in red and blue lines, and if I switched my eyes, open/closed, rapidly in left-right sequence, my little couple did, endlessly, the old in and out.  Maybe I showed my friends this clever little item,  but I don’t recall.  I only recall the dirty deed, as it were.

Drawing thanks to Steve Lack

Beyond these little shreds, there is nothing I remember of my youth which seems to point towards my future as a filmmaker.   Like others, of course I saw movies, though I think less than my contemporaries.   Of those films I do recall I think they are undistinguished and my memories of them are clearly faulty.  My vision of the desert area east of Los Angeles, the Mohave, was fixed by Them, a rather typical and stupid movie of the fifties, mixing nuclear fears with anti-Commie paranoia:  I have vivid images of the parched desert colors, pale yellows, palms, blue skies.  Except the film, as I found in seeing a slice of it on TV in the last decade or so, was in black and white.  And there is another sci-fi film which I recall, in which aliens from outer-space land and implant themselves underground, and suck their victims down via a sandpit.   Once in their clutches these souls are drilled in the back of the neck and sent back, infiltrating the middle-class world from which they were sucked, turned into dutiful zombie-commies).  I forget the title, but some time ago I saw it, or part of it, and was astounded by the wooden acting, the fake sets, the utter lameness of it.  Likewise Creature from the Black Lagoon, with its absurd aqualung-humped monster was cause for ridicule rather than entrancement.   Certainly those films, and the others I saw, did nothing to prompt me towards what became a large part of my life.